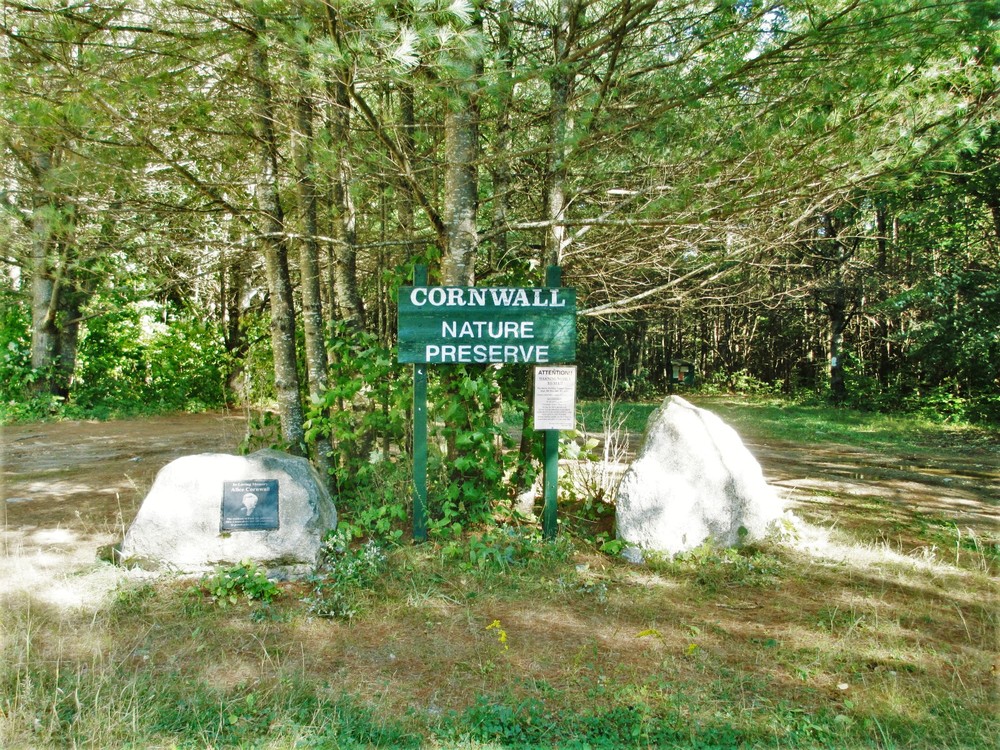 Before the small village of Paris Hill was founded in 1779, it was known as Jackson Hill. The Jackson family farmstead sat atop the hill and remnants of the farm can be seen within the boundaries of what is now known as the “Cornwall Preserve”. I use the term ‘remnants’ loosely as all that remains are hefty stone walls, the historic ice pond dam and a forest of giant trees, ferns, and wildlife.

The preserve consists of 147 acres of woodland which would have been home to the farmhouse, barn, outbuildings, orchards and working fields. Three miles of trails weave around the preserve and are fairly well marked with splashes of colored paint on trees. Each trail is marked with a different color paint as they intertwine throughout the densely overgrown forest, crisscrossing one another as you venture deeper into the woods. The paths are very worn and lumpy, definitely a challenge for anyone who isn’t sure footed or wearing ‘appropriate footwear’…sneakers or boots are a must…as are socks and insect repellent. A walking stick would have been helpful fording those slippery, mossy stream rocks. However, the trails are considered easy and fairly well maintained. The Town of Paris is responsible for the maintenance of the preserve having received the land from, long time Paris Hill resident Alice Cornwall, and having it remain a nature preserve in perpetuity.

It was a beautiful early June morning and I beckoned my favorite person in all things historical, Rosemary Losso,  to join me and we headed to the preserve. After dousing ourselves in insect repellent and pulling our hats down over our ears and our socks up over our pant legs (how attractive), we headed past the welcome kiosk and into the woods. We played it safe and followed the “white trail” which is the main trail…being directionally challenged I was good with that decision.  The trail beckoned us as we stepped into the midst of an ethereal overgrowth of giant ferns, mosses of every color green imaginable, and ancient trees the size of which there is no comparison. As the sunlight filtered through the overgrowth it felt like we were walking into a timeless sanctuary where peace and beauty emanate.

Caught by surprise, our first mystical encounter was a stump (see gallery below)  transformed by a miniature red table surrounded by numerous acorn caps and sprinkled with fairy dust as if a fairy tea party had taken place earlier.  As we continued on, more and more enchanting surprises lay ahead as we entered the designated “mystical forest” section of the trail. Tiny rabbit and green frog figurines would peer out of crooks in the tree roots, amazing stick sculptures and log creatures appeared…every turn was an adventure of  creativity. Elaborate fairy dwellings and sculptures piqued our interest in who had come before with such imagination.

Enter the sound of trickling water as a meandering stream lead us out of the mystical forest and into what I would call the ‘forest primeval’. The gentle rippling of the water over the moss covered river rocks and sometimes boulders was soothing and steady. Sometimes the stream would cross our path and provide a slippery slope to cross as our shoes slipped over the mossy stones before terra ferma was once again under foot. This area cried out for reptilian and amphibian creatures to slither over and among the mossy stream bed including salamanders and wood frogs and I’m sure snakes although we didn’t see any on this hike.

Soon we happened upon a  small rustic hand scored sign leaning against the base of a tree where the white and purple trails meet. (See photo)  We could just barely make out “The Ice House Trail” pointing off to the left and we decided to follow the purple trail to see if we could get a glimpse of the old ice house. The purple trail follows the meandering brook with twists and turns, past giant boulders of glacial origin and eventually rejoins the white trail. About halfway along this trail the river rocks turn into larger boulders and are stacked one on top of the other in what must have been the old “ice house dam”. The ice house is long gone but the dam remains as testament to its existence.

After the dam, the trail became a little more uphill and followed the stonewalls of centuries ago that would have cleared and sectioned off the Jackson haying fields. There were trees the size I couldn’t have even imagined…if these trees were to fall in the woods they would definitely make a sound whether you were present or not. We had finally circled back to the white trail and headed towards the parking lot. We caught glimpses of little clay creatures hidden in nooks and crannies as we put the ‘mystical forest’ behind us. The little red table on the stump we noticed on our way in with the acorns had been moved by  a forest angel I’m sure.

As the forest primeval had welcomed us, it just as ethereally bid us farewell. The same light led us back to the parking lot and we left with lighter hearts than when we started.

I highly recommend a visit to the Cornwall Preserve but dress accordingly and leave it just as mystical as you find it. And take your cellphone in case you get lost or take a tumble.

These two websites provide a wealth of knowledge regarding the preserve and the flora and fauna found there:

This feature was written by Linda Richardson! Thank you!