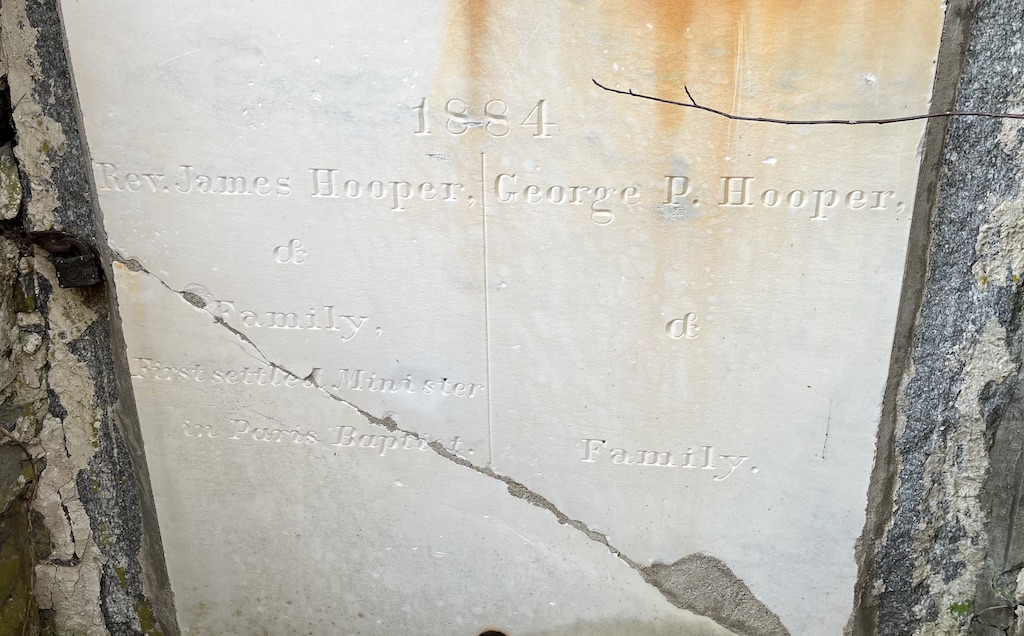 As Halloween approaches, I’m always intrigued by some of the spookiness that surrounds Paris Hill. Overgrown cemeteries with moss and lichen covered stones adorned with creepy etchings depicting death and dating back to the 1700’s, rusty iron gates, a mysterious old cellar garden, houses with boarded up windows, apparitions, orbs, a mysterious murder and “tombs”.

Last year, I visited the infamous Chandler tomb and was pleasantly surprised at how well it has survived the past 200 years. I took Rosemary Losso with me just in case a hand reached up out of the ground and grabbed my ankle. I have a vivid imagination when it comes to the supernatural.

This October, my all things mysterious journey took me down the Hooper Ledge Rd in search of the “Hooper Tomb”. I’d read about this tomb in my “Paris Cemeteries 1793-2004” compiled by the Paris Historical Society.

It was a beautiful October morning when I called my good friend and partner in crime Brian Partridge and asked if he would join me on my latest mysterious trek. Our first stop was Pine Grove Cemetery in Paris. I needed to locate and take pictures of Dr. Littlefield’s tombstone for my article on the “Littlefield murders”. Brian pointed out the valuable legacies represented on the stones in that cemetery. Transplanted bodies of early pioneers and settlers from forgotten private cemeteries, infamous early businessmen, cultural icons, nameless children having succumbed to epidemics, local statesmen and war heroes abound resting under the aging pines. We could have spent the entire afternoon walking among the stones and feeling history come to life under our feet. But alas, we had another major mysterious experience calling us. I took my pictures and we headed towards the Hooper Ledge road.

Approaching the Hooper Ledge road from RT 117, we took a left and proceeded up the hill. In a previous visit, I had scoped out the location of the tomb, so I knew it’s exact location. The tomb rests inside a stone wall overgrown with bittersweet and all kinds of thorny brush and vines. There is a small iron gate topped with beer cans someone has used for target practice in the past. As we scurried up the embankment toward the tomb our feet were grabbed and entangled by the vines almost like an omen not to trespass on this sacred space. Brian stood outside the iron gate (hmmm did he want the insurance of a quick escape if things got scary) as I proceeded to climb over the stonewall and enter this sacred spot. Before me loomed the ‘Hooper Tomb’. Majestic, no, hallowed, no…just a huge mound of dirt fronted by granite slabs, a white engraved limestone door secured by iron strap hinges and an old iron lock. There was little to no maintenance of the lot, however, it wasn’t overgrown or obscured by over a century of leaves, vines or debris. The door showed signs of its age, a rusty shadow under the hinges and a large crack in the limestone but other than that it has fared well since 1884.

Elder James Hooper, born in Berwick, Maine in 1769, settled in Paris in 1794 and in 1795 he was selected and ordained as the first minister of the First Baptist Church of Paris. Prior to the building of the first church on Paris Hill, services were held in barns and private residences. Elder Hooper and his new wife lived on a farm on the Hooper Ledge road, hence the family burial plot located on this property. The property stayed in the Hooper family until 1898. Buried in the tomb were Rev James Hooper, his wife Sally Merrill, and daughters Polly and Eliza both approximately 6 years old having died of ‘canker rash’ just days apart. Also buried in the tomb, James Hooper’s nephew George, George’s wife Abigail and their son William. Other Hooper family members may be buried in the same tomb, William H. and John J. Hooper. As time passed and the property was sold outside of the family, it appears town officials had the tomb sealed to protect it from vandals and animals sometime in the early 1930’s. It isn’t clear who oversees the tomb and lot now.

Having paid our respects to yet another famous figure with ties to the Hill’s historic past, we turned and left the somber site just as we found it…peaceful and quiet under the shade of a beautiful autumn afternoon. As we traversed the embankment, those pesky vines yet once again grabbed onto our ankles now begging us to stop and take one last look at the tomb they have guarded so faithfully all these years.

HAPPY HALLOWEEN TO ALL

Story and photos submitted by Linda Richardson – thank you!