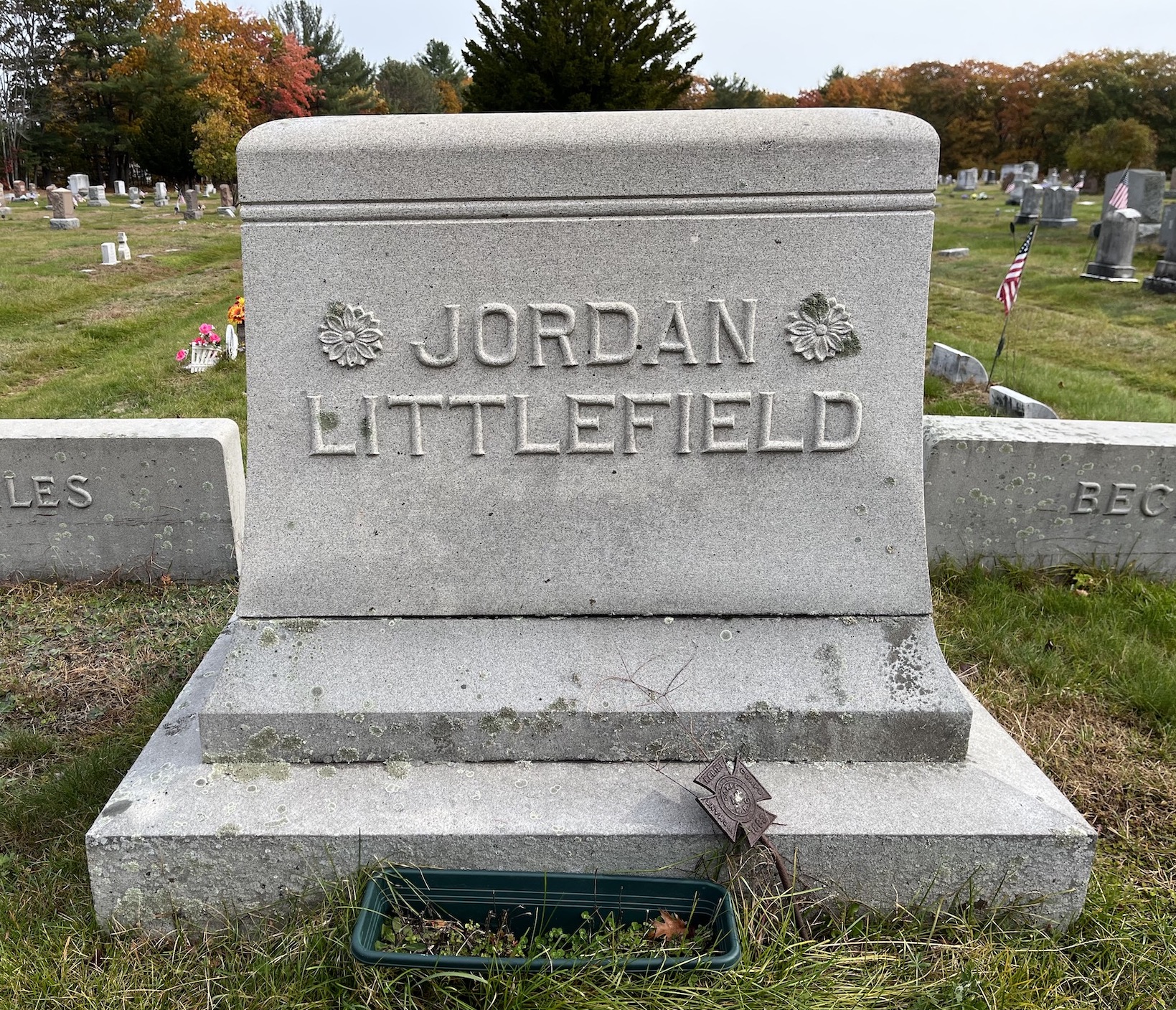 “It was a cold October morning. Two patrolmen stopped to make a routine check on a car parked off the side of the road. On the back seat was the body of a woman. In the trunk was the body of a man. And behind the wheel sat a quiet 18-year-old boy…” (excerpt from: Thunder Over South Parish, Addison J. Allen, author)

As the falling leaves of October blow across Paris Hill Road from in front of the Country Club and into the yard of the old “Delta House” (now owned by the Decato’s), I’m always reminded of a dark time on Paris Hill. It was October 16th, 1937 when murder tore at the spirit of this quintessential village we call home. The events leading up to the murders of Dr. and Mrs. Littlefield are sketchy at best which in turn caused the incarceration of two men when likely only one man had committed the murders. “Whodunit”, the 17 year old young man, Paul Dwyer living with his mother across the street from the Country Club or the Oxford County Deputy Sheriff Francis Carroll whose daughter was Paul Dwyer’s girlfriend.

Here is a synopsis of the murders provided by the New England Historical Society:

The death of Dr. James Littlefield on October 13, 1937 in South Paris was not the biggest crime story in the state of Maine. That distinction belonged to Bangor where the streets were filled with gunfire as the notorious Brady Gang met its demise in a shootout with police and FBI.

Three days later police around the country were still looking for any signs that members of the gang had gotten away. In Arlington, N.J., police noticed a car with Maine license plates pulled over beside the road with a young man sleeping in the front seat and a woman in the back. While they were wrong to suspect the two were connected to the Brady gang, they were very right to be suspicious. The woman in the backseat, Lydia Littlefield, was dead. Strangled. In the trunk they found her husband, Dr. James Littlefield, also dead. Bludgeoned and strangled. The man behind the wheel – 17-year-old Paul Dwyer – confessed. His extradition to Maine kicked off one of the most convoluted and lurid murder trials in the state’s history.

Before it ended, two men would be convicted of murder, launching a debate that continues to this day as to who did the actual crime and why.

Dwyer, a chauffeur with no criminal record, outlined the murder story in his initial confession. Though Dr. Littlefield had an addiction to morphine, he still had a reputation as a respectable physician.

Dwyer had suspected he had venereal disease and called the doctor. Littlefield treated him during a house call, but chastised the young man about the company he kept. Dwyer flew into a rage because the doctor had insulted his girlfriend, Barbara Carroll. He then attacked the doctor, killing him.

Dwyer then stuffed the doctor’s body into the trunk of his car and drove to the Littlefield home. He told the doctor’s wife, Lydia, that the doctor had left on a train to Boston. According to his fantastic story, the doctor had hit two pedestrians with his car, panicked and fled. He asked Dwyer to pick up Lydia and meet him in Boston.

For two days, Dwyer stayed on the road with Lydia as a passenger, explaining that at each stop he had received instructions from the doctor to travel to a new destination. The pair traipsed around from South Paris, to Boston, back up to Concord, N.H., and then back to Maine. Dwyer finally strangled the increasingly suspicious Lydia and propped her in the back seat, as if sleeping, and went on his way to New Jersey. Oddly enough, two police officers stopped the car for traffic violations, but sent Dwyer on his way with only a warning—all while Lydia “slept” in the back seat.

Dwyer pleaded not guilty, but after two days of trial he changed his plea to guilty. The judge sentenced him to life in prison, but the public had doubts. The motive for the murder seemed slim, and Dwyer seemed an unlikely killer to those who knew him.

Behind bars, Dwyer took up pen and paper and wrote a very different version of events. In this second version, Dr. Littlefield had not come to the Dwyer home to treat Paul. Rather, he had come there to examine Paul’s sweetheart, Barbara, who feared she’d gotten pregnant. Barbara told the doctor that her own father, Deputy Sheriff Francis Carroll, might have impregnated her.

Barbara had told Dwyer of the incest and the two had turned to the doctor for help. Dr. Littlefield confronted Francis Carroll and threatened him. The deputy killed the doctor and bullied Dwyer into helping with the getaway. Carroll, Dwyer said, killed Lydia and sent Dwyer on his drive.

Dwyer had changed his plea, he said, because Carroll had threatened him. Police didn’t think the new account had any more truth to it than the old one, but the story rang true to one person: Carroll’s boss, the sheriff of Oxford County. He arrested Carroll on the incest charge in 1938 and began investigating the murder. In short order, Carroll stood trial and a jury convicted him of the murder. Carroll privately denied the incest allegation, but did not do so in court. His lawyers feared that if he addressed it, his daughter would have to testify and add to the weight of evidence against him.

Carroll offered an alibi for the murder of Dr. Littlefield, but he couldn’t back it up. He was accused of trying to bribe a witness to support him. Another witness reported seeing him at the scene of the murder. In the end, the jury was persuaded that Carroll was guilty.

Now two men were in the state prison convicted of the same crime. There the matter would sit for 10 years while both Carroll and Dwyer proclaimed their innocence. In 1950, Carroll would finally win his release and the Legislature would order the attorney general to re-investigate the case.

At this point, prosecutors could not charge Carroll with incest. Nor could a court retry him for the murder of Dr. Littlefield. But the court could retry either him or Dwyer for the death of Lydia Littlefield, a crime that neither had so far been accused of.

In the end, the last investigation – published in 1952 – found reasonable doubt as to Carroll’s guilt. He should not face additional charges, the investigation concluded. Carroll went free. Dwyer would, himself, win his freedom on parole for good behavior.

So there you have it, you can make up your own mind as to  “WHODUNIT”.

“Thunder Over South Parish” originally titled “New England  Gothic” was published in 1960 and caused a real stir in the  community due to its salacious content….hardly ‘salacious’ in  today’s literature however. I can remember growing up on the Hill  in the 1960’s and hearing about the macabre novel. I was sworn  to secrecy when I caught my sister, who was six years older than  me, hiding a copy of the paperback under her mattress. To this day I’ve yet to read the book, still abiding by my parents wishes – haha, but perhaps one of my more risqué neighbors might have a  copy hidden under their mattress I could borrow.

So when you walk or drive by the old ‘Delta House’ notice the  boarded up window on the second floor. It’s said this was the  bathroom window in the room where the murder took place.  Folklore has it that boarding up a window is an attempt to close  off the memory of a tragedy too horrible to bear.