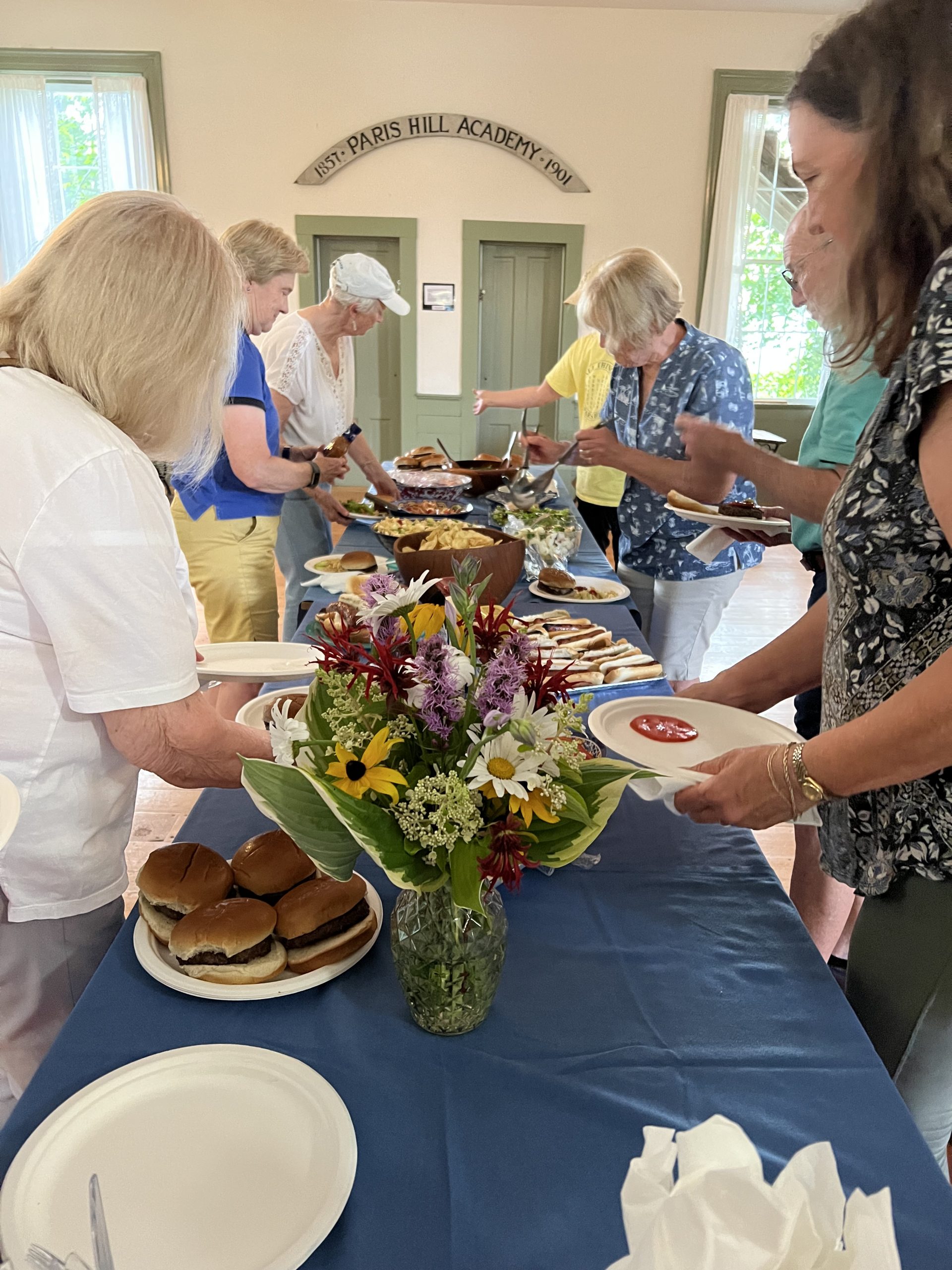 Hosted by Board Members, Jeff (and Lina) Richards and Peter (and Becky), this was our first Saturday Summer Barbecue. About 30 residents and guests attended this event and were treated to games, music, food, and conversation on the lawn in front of the Academy. The crowd was a mix of young and old, new and long time residents plus one amazing Australian Shepard pup.

President Chuck Frost agreed to have a short business meeting outside before going into the Academy for dinner. He thanked our hosts and welcomed new faces to the dinner.

Mike Morin was not present for a treasurer’s report, but the sent in his latest report. Includes proceeds from this dinner. $13,643 Checking, $13,344 Building Fund.

Chuck’s report to the community addressed issues the Board has recently dealt with:

Projects still needing to be scheduled his year if possible:
Roof nail replacement. Board is still searching fro a contractor that can do the work

Leslie Olson has volunteered to host the appetizer portion of the Progressive Dinner in early November, date to be determined. Thanks Leslie.

Board of Directors and Officer openings needing to be filled at August Annual Meeting on Wednesday, August 17. Contact board member if you can step up.

By-Laws revision omitting Historian Position as a Board position.

Then we went inside to a nice cool Academy for dinner.

The burgers, hot dogs and sausages were grilled to perfection in the Richardson’s garage with delicious salads, many made from homegrown produce. Linda’s garden bouquet was lovely, and the long center table was laden with great food. Thanks to the Brogans, the Thompsons and the Lossos’ for salads. Our hosts surprised us with a different dessert: ice cream sandwiches and Klondike bars!

After dinner many folks hung around outside to enjoy the cool evening and watch a game of croquet (Peter Roy won, I think). Everly Black, 4 years old, provided some entertainment as she tried to figure out croquet. There was more Corn Hole and a ropey game that provided some laughs. And that beautiful Australian Shepard pup playing frisbee.

Next up: August 17, Annual Meeting and Super Summer Salads hosted by the Brogans.