We know the Paris Hill Academy building as the venue for our summer dinners and seasonal events. However the building has a long history as both a school and an entertainment venue dating back to 1856!

After two unsuccessful attempts to establish a school on Paris Hill, the third try was successful.  Fifty-two citizens agreed to financially support the effort.  The lot was purchased from John R. Merrill in 1856 for $300.00.  His house was located at the front left-hand corner of what is now the front lawn of the Dieterich property.  The Merrill house was removed in 1918.

The building was completed with the help of local residents and a celebration ball was held in the Spring of 1857.   The bell tower, however, remained empty until Edward L. Parris donated a rotary action bronze bell in 1892. 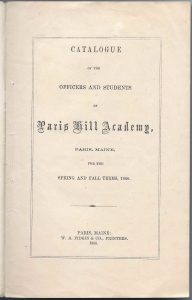 The opening enrollment was made up of twenty-eight boys and twenty-one girls.  Paris Hill Academy was a private school since public education had not been established at the time.  An academic period was eleven weeks.

An ad promoting the Academy stated that “Paris Hill Academy is situated in the beautiful and healthful village of Paris Hill.  It designs to afford the best of facilities to students preparing for College.  A Normal Class, which under the personal supervision of the Principal, holds weekly sessions, also offers superior advantages to young ladies and gentlemen preparing to teach.  The only requirement for admission is a good moral character”.

Maine law in the 1880’s was passed to require towns to provide free schools.  As time went on, private schools were less attractive and by 1900 enrollment at Paris Hill Academy had significantly declined.  The last class to graduate was in June 1901.

The building was used for the next 40 years as an entertainment venue hosting plays, concerts, dances and community socials.  In 1948 the former school room was renovated through the efforts of local residents, and then in 1957 it was a turned over the newly formed Paris Hill Village Corporation for the sum of $1.00.   That corporation dissolved and since 1966, the building is maintained by Paris Hill Community Club.

Since then the iconic structure has been carefully maintained and restored through a series of community events and monthly summer suppers, and the occasional House and Garden Tours. Currently we have six suppers that serve the community:  two seasonal parties held in homes, and four summer suppers held in the building.  Donations from these events fund our operating expenses.

We receive no public funds and rely on fundraising and donations to keep the building intact and doors open during the summer months. This loosely organized group of neighbors, with an elected  Board of Directors and Trustees, has been responsible since 1966  for all restoration and maintenance.

Thanks to MaineMemory.net for the playbill images and Heirlooms Reunited for the 1866 Academy Catalogue.